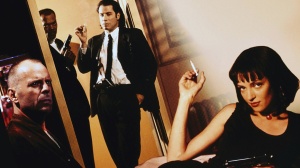 Forrest Gump, for sure, doesn’t deserve the big backslash from film fans for defeating BOTH Pulp Fiction and The Shawhank Redemption, which easily are 2 of the most loved films of the 90’s (and even film history). In addition, the acknowledge that both The Lion King and Ed Wood had to sit aside the Best Picture seat favoring the almost forgotten by now “Quiz Show” and the rom-com “4 Weddings”, plus the supposed blandness of good ol’ Forrest, isn’t easy to digest for many. Truth is, the top 5 contenders, are all almost masterpieces in my book. With only 5 nominees, it was obvious some films needed to be left out. If we’re going to give it a try to guess, which would have been the Best Picture nominees if up to 10 slots, Ed Wood, The Lion King, Nobody’s Fool and Bullets over Broadway seem quite clear. The 10th slot probably would have been empty or taken by Three Colours: Red, which got a Best Direction nom. My line up would have been tremendously different, for the matter.

There’s no need to talk about Pulp Fiction, probably and why it should have been the winner. It’s arguably THE film that defines the 90’s itself. Talking about the other top 5 is more interesting.

Clerks is my runner up for 1994. If Tarantino wasn’t around with his sophomore, Kevin Smith’s rookie film would have probably be the film the 90’s would be defined for, and that’s something every film critic, secretly knows in his inside. Tarantino probably does, as he’s one of Smith’s friends and confidents (along with Robert Rodriguez and some others, they make a real “rat pack” of indie filmmakers who constantly talk with each other and meet). Clerks is born of pure passion for filmmaking. It’s the wet dream of any aspiring filmmaker, actually. You get a bunch of your friends, get the money from wherever possible, and just shoot what you can, almost guerrilla style. It is almost impossible to hate Clerks. It is almost impossible to acknowledge, for any “serious” film critic how magnificent it is, once you acknowledge the limitations it faced… shoot a film almost out of nothing. Years later, another indie stunt/masterpiece got also blatantly and shamelessly snubbed of any Oscar recognition, “The Blair Witch Project”, which is another wonder to treasure… but that’s 1999 and another story.

My third film of the year was “The Adventures of Priscilla: Queen of the Desert”. Talking about underrated masterpieces, here you have one. It not only features a cast to die for (Terence Stamp, Hugo Weaving and Guy Pearce) in top form and playing against type, when nobody remembered Stamp (an old glory) nor really knew Weaving or Pearce (they broke through later). Cinematography is a-m-a-z-i-n-g, the costumes earned a richly deserved Oscar (its only nom) and the story is deeper than expected, way deeper, with surreal touches, and a contagious, infectious joy of living. A tale about tolerance, acceptance, set in the surreal australian outback.

My fifth pick is, probably, the most daring animated Disney film ever attempted. Setting an amalgam of Shakespeare’s work in the set of African wildlife, was not only brilliant, was amazing. The music is simply unforgettable, as the creation of some characters, which went on a successful and fun animated cartoon TV-spinoff.

I don’t mean Forrest Gump wasn’t deserving. Everybody that read the book probably know that it is unfilmable as it is, so they did a great adaptation to make it something not only watchable, but epic and classic. The Shawshank Redemption, has the handicap of featuring almost every possible prison-movie cliché in film history, which undermines its personality enough to get a lower position in my book than on almost anyone’s else (IMDB’s top 250 features it always among the top 3 EVER). Four Weddings and a Funeral is THE rom com per excellence, and I love the challenge its structure provides and how successful Mike Newell got with one of those cast you can’t help but loving all together. So many films did try to repeat its charm and couldn’t.

The other two misfits of my list… well, Bullets over Broadway is one of Woody Allen’s best films, funny as hell, and well directed all together, simply that. And True Lies is the popcorn film to die for. Actually Arnold Schwarzenneger had a really good year to prove he could act beyond one liners, this one and also his Golden Globe nominated performance in “Junior” (a film I remember way better than the rest, it seems). Before Titanic, I feel this one paved the prestige to sit on a Best Director line up in the future.

Biggest snubs, in my opinion in other categories…

I think that probably, if AMPAS repeated their polls, the line up would change drastically everywhere.

… I have to make very clear my position… despite being interested in what Bigelow, as a filmmaker, may have created, the whole issue bugs me beyond belief – yes, I’m a conspiranoid, but how couldn’t I be, given my professional background?

It haven’t been so long when Michael Bay decided to show us that Pearl Harbor had a revenge, in which – literally said in the film – they just wanted to focus on the factories (when History show us otherwise and the raids on Tokyo are one of the worst crimes against Humanity ever commited, not to mention the surprise when you read the wikipedia article about the actual events… http://en.wikipedia.org/wiki/Pearl_Harbor_%28film%29 and http://en.wikipedia.org/wiki/Bombing_of_Tokyo

But that film is spectacular crap and that’s its main intention, anyways… problem is, when you distort and twist reality to transform a bunch of desperate soldiers into heroes and victims, in Black Hawk Down, probably the most successful and disgraceful propaganda film attempted since Leni Riefehnstal, in which we follow the drama of less than a couple of dozens of american soldiers (played by scots, australians and so on) in a survival fight that left over one thousand victims in Somalia. Manipulative with racist touches (as subtle as let some somalians hang like monkeys from the fallen helicopter) here and there, somalians are shown as nameless, faceless zombies with guns. Despite the large amount of killing in the film, only a woman is seen being killed by the heros (despite their warnings to NOT pick up the gun, in english, of course) and only a death child is seen (who killed him? the movie doesn’t say, but for 2 hours you’ve checked out that the heroes only kill those who “deserve it”). The movie came *this close* to a Best Picture nomination, Ridley Scott got *this close* of actually winning the Oscar he lost the year before with the much superior in all senses – specially if we talk about ethics and morals – “Gladiator” and the film actually has 2 Oscars in their bluray label. Thank God, in technicals.

So, manipulation and propaganda ain’t anything new in Hollywood or in the Oscar campaigning, anyways. And here comes Zero Dark Thirty, a film that, like Black Hawk Down, seems to be, technical and artistically, brilliant on all levels. But there are two extremely important issues to be addressed before jumping to it.

– 1) It is the “official Hollywood version” of something there’s not a single proof that EVER happened. Wait, wait, you’ll say, I saw Obama and Hillary watching it happen. No, you saw PHOTOS of Obama and Hillary reacting to something on a TV, that’s the accurate truth. You haven’t heard anyone saying “I did it”. You haven’t seen Ben Laden’s corpse but in photos that were proven fake by the US government itself (some really bad photoshopping). There’s no location of the corpse, no names of the witnesses and the most basic logic actually undermines the whole history, specially when you think about the extreme kidney disease Ben Laden had and that he managed, somehow, to overcome with medication and dyalisis for over a decade – one of the most easy things to track down for intelligence. You need too much faith or a big suspension of disbelief to believe Osama made it into the 10’s of the XXIst century, being the most hunted man in the world, and living just 200 kms. away from the troops, in a country that is – supposedly – an US ally, and in one of the most poor areas in that country (with that huge reward for any info about him). So, basically, the Obama history sounds like bullshit, and what underlines the kind of world we’re living in, is that the official media actually doesn’t even try to question what it looks so obviously as a lie. And here it comes, the “official” Hollywood version soon to be rewarded with a shower of Oscar nominations. I’ve seen reviewers sink masterpieces with less important plot holes.

– 2) The torture aspects of the film, being discussed… Seriously, I’m losing respect for a lot of reviewers who are being so easily drown into the “it is good, ’cause it works – it is bad, ’cause it doesn’t”. Torture is BAD wether it works or not. I don’t mind Bigelow showing in her fairy tale – designed to comfort a society of traumatized sheeps who would swallow anything just to feel a bit safer – prisoners being tortured to get information. If there’s a country that actually refined torture in the XXth century and spread it worldwide (http://en.wikipedia.org/wiki/School_of_Americas) it probably is the USA. The “Patriot Act” only underlined what everybody with a little interest in human rights, worldwide, already knew. When you focus the criticism on the validity of torture just for its results, the first thing you lose is all your credit as a human being. From what I read, Bigelow decides to just portrait that torture was a part of the hunt, and lets the audience decide if it worked and if it was worth. Problem is, the point of hunting Ben Laden, #1 of an Hydra with so many heads, the CIA reports, should have always been to get him alive, question him to help dismantle the whole Al-Qaeda, put him into trial and sentence him and finally show the world, specially the muslims, that this never was a crusade, that this never was revenge, but JUSTICE. That we were better than him.

But of course, you have to wonder why so many intelligent people shies off bringing this basic, primary points into conversation. And how the ones that do it, are instant, massively labelled as conspiranoid weirdos.

I will see Zero Dark Thirty in the future, even if I will think of it as just another propaganda film rather than a representation of real events.